Staff member
A muslim activist who CNN has named in their top 25 muslims, has made a fool of herself. Although I'm SURE the media will spin it as white privilege. He gets to walk through TSA screening without taking off his shoes. Why? Because he's white and she's muslim. Anyone and I mean ANYONE who flies airlines KNOWS that if you have paid for and been approved for pre-check, you don't have to take off your shoes. He gets to board the plan before her. Why? Because he's white and she's muslim. Anyone, whether you fly or not knows that one of the perks for 1st class is the you get to board FIRST.

I recently flew down to Miami and decided to pay the extra for 1st class, mainly because I had a super short layover in ATL and wanted to make sure I had time to get to the other gate. After reading about this STUPID woman and her extreme persecution complex, I'm SURE there were some folks behind me who thought to themselves " Uh huh......it cause he'z white". You can't fix stupid but the media COULD choose not to run stories highlighting their stupidity. 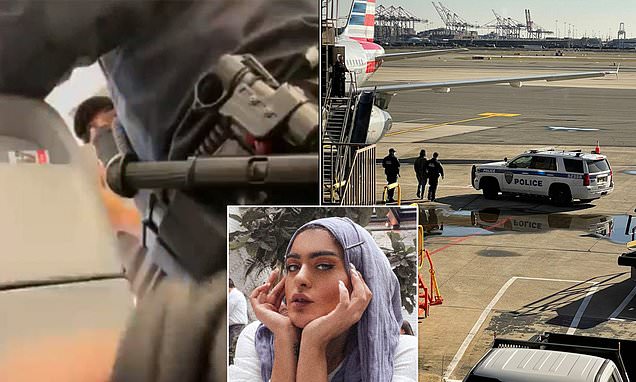 Footage of the incident involving Amani al-Khatahtbeh - which took place on board a plane set to take off from Newak, New Jersey, to Charlotte, North Carolina, - was shared to Twitter

Why would being in first class change anything about getting to the gate during a short layover?
Y