That'll get you thrown off of Twitter. (or any other "woke" social media)

Democrats have blood on their hands. 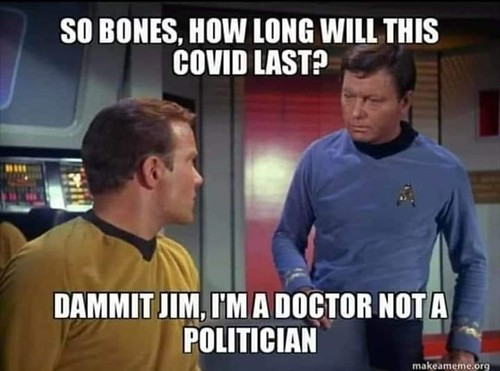 A few quack "doctors" going against the entire medical community and evidence. Amazing you'll believe this conspiracy propaganda BS over the actual facts. This is why we have 150k dead Americans and climbing.

The president is pushing the coronavirus theories of a Houston doctor who also says sexual visitations by demons and alien DNA are at the root of Americans’ common health concerns.

Hey, John, I got a bridge and swampland to sell you too LOL

Furthermore, Sommer reported that in “a 2015 sermon that laid out a supposed Illuminati plan hatched by ‘a witch’ to destroy the world using abortion, gay marriage, and children’s toys, among other things, Immanuel claimed that DNA from space aliens is currently being used in medicine.” She also offered prayers through her website to remove generational curses transmitted through placenta.
In a news conference Tuesday, Trump addressed the video, saying: “I think they’re very respected doctors. There was a woman who was spectacular.” He did not specify which woman. He added of hydroxychloroquine, “I happen to think it works in the early stages.”

You are THE master at finding these things.

PolitiFact - Don’t fall for this video: Hydroxychloroquine is not a COVID-19 cure

PolitiFact is a fact-checking website that rates the accuracy of claims by elected officials and others on its Truth-O-Meter.

Those Texas Medical Board Licenses must be pretty easy to get, I think I'll pick one up.

When people who believe that Aliens rule the USA are taken seriously, then I am having a bad dream or we live in an Idiocracy!

crawl back in your closet old guy

john348 said:
crawl back in your closet old guy
Click to expand...

He's the only one saying anything sane in this thread. 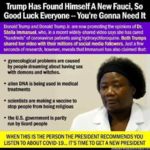 John believes she is the real deal, he couldn't wait to send me her video with her other fake doctors my age does not affect my thinking I see how tRump con you, he let you keep your toys, but in the end, Putin will own us, thanks to tRump
Last edited: Jul 29, 2020

Notice how all the liberals go after the Doctor from Africa? Same old racist party it has ALWAYS been.
You must log in or register to reply here.
Share:
Facebook Reddit Email Link
Top Bottom